It’s been quite a year for Josh Tillman as Father John Misty. Last summer’s Fear Fun has seen wild success, and Tillman continues to wow audiences with his erratic on-stage antics. Saturday night at the Wonder Ballroom alongside Pure Bathing Culture was no exception.

Portland’s own Pure Bathing Culture have me buzzing with anticipation over their first full-length release Moon Tides. Though the band has been active since 2011, it seems like we’ve been waiting forever for a full-length release. The band’s been getting hype from many blogs and has released songs to both Gorilla vs. Bear and Blalock’s Indie Rock Playlist.

Saturday night’s mellow set was a mix of fan favorites like “Ivory Coast” and some new material, like “Pendulum.” The band moved effortlessly between songs, and held the audience’s attention throughout—and performed well enough to distract the audience from Father John Misty’s gaudy stage adornment.

Father John Misty opened with “Fun Times in Babylon,” a staple of his set list. A huge, colorful backdrop of rainbows, mythical creatures, and what appears to be Tillman riding a horse enveloped the band in their own hyperbole. Many of Tillman’s lyrics directly contradict this idea of fantastic decoration—“Try not to think so much about the truly staggering amount/ of oil/ that it takes to make a record”—proving to the audience that he doesn’t take himself too seriously.

This was my fourth time seeing Misty in action, and his performances continue to get more and more ridiculous. I find it charming, but I’m sure some don’t, especially those who do take his music seriously. Hearing the same album performed for the fourth time can get tedious, though, and I think that Tillman’s behavior at least breaks up the monotony a bit.

As per usual, Tillman danced chaotically, swinging his hips and waving his microphone stand in the air, enticing laughs and cheers from the audience. He made jokes—“Hey, where do I have to go in this town to find a vegan donut?”—and never missed a beat performing nearly all of Fear Fun. Antics aside, Tillman’s voice is one to be reckoned with. We don’t care what sorts of theatrics he does if he can hit those notes.

During the encore, the band performed two new songs. “We Met at the Store,” is a solo ballad about a man’s fateful trip to the grocery store that leads him to meet a woman who he intends to marry. The second, “I Love You, Honeybear” is a twisted love song, played with the whole band. Between the songs, Father John Misty performed the Beatles’ “Happiness is a Warm Gun.”

Though Father John Misty could perhaps dissolve into just another project for Tillman, the band has staying power. Two new songs and an obvious following bode well for Fear Fun fans. And if the narrative arch of Tillman’s musical career is any indication, things are only bound to get more exciting.

The past few months have been consumed by laborious paper writing, publishing a weekly newspaper 10 times over, burning bridges, making connections, traveling, conferences, too much beer, turning 21 (finally), and desperately trying to fill the void in my “no-college-for-three-months” life.

In case you didn’t realize the number of crazy humans I have to manage.

During finals week I swore to myself that I would start this blog back up ASAP, because I miss writing for myself and writing about what I love. Unfortunately, the past few weeks have been filled with more Netflix and knitting than blogging and it has taken me a while to get back in the saddle. But I’m here now, and I will be here every week this summer.

Whiskey kiss is BACK y’all, and its going to be better than ever.

Between writing for Rip City Review, having a cool communications internship, working on campus as a PR babe, and living my life to the fullest, we’re going to have lots of fun. 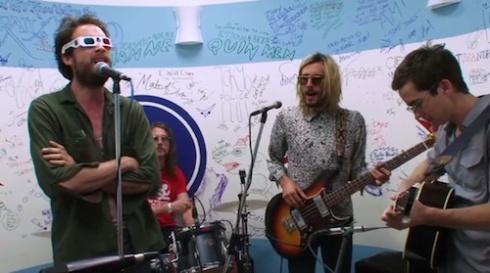 What can you look forward to? Well, I’m headed off to see Father John Misty soon, and I am excited. Fear Fun has been stuck in my head for a year, and Josh Tillman is the most talented performer I’ve seen in a while. Needless to say, I’m looking forward to it. You can look for a review here tomorrow, and one on Rip City Review soon, too!

For now, check out this video that I listen to whenever I’m feeling sad, gooey, or hyped for an FJM concert.

And thanks for having faith in me. This little dream of mine won’t die, and you following my ramblings makes it all worth while!